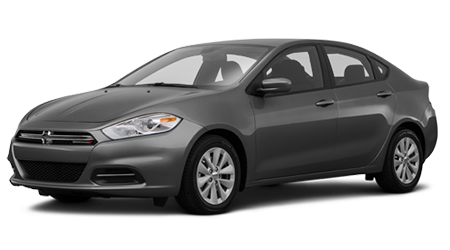 The 2015 Dodge Dart is a small sedan that is affordable and efficient without looking or feeling like an economy car. If you're from Ewa Beach, Wahiawa, or Kapolei, HI the place to buy the new Dart is Cutter Chrysler Dodge Jeep Ram of Pearl City. We're serving O'ahu with the best deals on all the hottest Dodge models.

Chevy's 2015 Cruze is a decent small car, but it just doesn't offer the power or style of the Dodge Dart.

The 2015 Dodge Dart offers three engine options, and all of them make more power than anything Chevy has to offer in the Cruze. The 2015 Chevy Cruze gets power from either a 1.8-liter turbo or a 1.4-liter turbo I4, both making 138hp. The base engine in the Dodge is a 2.0-liter four-cylinder with 160hp, with a 1.4-liter turbo I4 option making the same power, and a 2.4-liter I4 making even more.

No Sacrifice for Economy

Both the Chevy Cruze Eco and the Dodge Dart Aero are specially packaged fuel efficiency models. Both come powered by 1.4-liter turbo I4 engines, but the Dart's has more horsepower and torque than that of the Cruze. You would think 20hp and nearly 40 lb-ft. extra torque would cost you at the pump, but that isn't so. The two cars score exactly the same EPA city mileage rating of 28 mpg with a manual transmission, and with the automatic the Dart beats the Cruze by 1 mpg on the highway and 2 in the city.

The 2015 Chevy Cruze looks a lot like many other compact economy sedans on the market today. The 2015 Dodge Dart is unique and stylish, looking like the little brother of the muscular Dodge Charger. If both cars are the same size inside, and drive the same, wouldn't you rather be in the one that stands out from the crowd with chiseled good looks and muscular styling?

The 2015 Dodge Dart is just as affordable as many other compact cars, but it has a premium feel and style that others can't compete against. Visit Cutter CDJR in Pearl City, HI and see just how premium an economy car from Dodge can be.